Here are some of the scrolls and medallions I’ve received over the years, they’re absolutely beautiful and deserve to be shared! 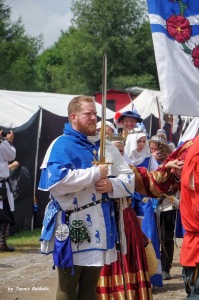 Marching in procession during Pennsic XLIX

My name is Baron Cataldo Querini and I am an artisan and fighter in the Kingdom of Atlantia. I enjoy helping people learn about metalworking, historic combat, and the anthropology of the SCA.

To learn more about the Society for Creative Anachronism (SCA), visit sca.org!